The Surgeon: a Rizzoli & Isles novel 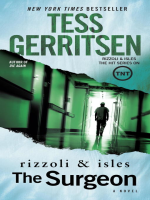 Description
NEW YORK TIMES BESTSELLER • "A briskly paced, terrifically suspenseful work that steadily builds toward a tense and terrifying climax."—People (Page-turner of the week)
This ebook edition contains a special preview of Tess Gerritsen's I Know a Secret.
He slips into homes at night and walks silently into bedrooms where women lie sleeping, about to awaken to a living nightmare. The precision of his methods suggests that he is a deranged man of medicine, prompting the Boston newspapers to dub him "The Surgeon." Led by Detectives Thomas Moore and Jane Rizzoli, the cops must consult the victim of a nearly identical crime: Two years ago, Dr. Catherine Cordell fought back and filled an attacker before he could complete his assault. Now this new killer is re-creating, with chilling accuracy, the details of Cordell's ordeal. With every new murder he seems to be taunting her, cutting ever closer, from her hospital to her home. And neither Moore nor Rizzoli can protect Cordell from a ruthless hunter who somehow understands—and savors—the secret fears of every woman he kills.

"[A] top-grade thriller . . . Sharp characters stitch your eye to the page. An all-nighter."—Kirkus Reviews (starred review)

"Creepy . . . will exert a powerful grip on readers."—Chicago Tribune
Also in This Series