Without warning: A J.B. Collins Novel 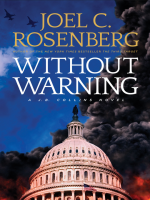 Description
"After ISIS terrorists attack the U.S. Capitol building during the president's State of the Union address, the entire world waits to see how the most powerful nation on earth will respond. But the Taylor administration is more committed to political correctness than to justice, and it falls to other nations to lead the way in hunting down Abu Khalif, the criminal and religious mastermind who leads the Islamic State. When New York Times journalist J. B. Collins, reeling from a tragedy closer to home, suddenly finds himself in possession of vital information that could help in the search, he is once again thrust into the crosshairs of global politics. But this time it's personal. As he joins the hunt for the world's most wanted and dangerous man, his quest takes him from Bar Harbor, Maine, to Tel Aviv to Cairo to Istanbul and beyond. Through it all, he has one goal: find Abu Khalif and hold him accountable for his terrible actions. But the clock is ticking, and more attacks are coming. Will Collins locate the ISIS emir before it's too late? He will stop at nothing to do so. But at what cost?"-- Book jacket.
Also in This Series