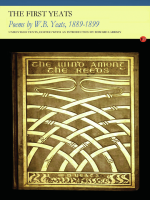 This landmark edition makes many of Yeats's early poems available to readers for the first time, along with many of his own notes about Irish mythology and folklore. Though he is best known for his later, more political poems, such as Easter 1916, he began his career as a student of Blake, Shelley, and the pre-Raphaelites. Many of the poems included here have been previously overlooked or unpublished—including many original versions of poems that became very well known after Yeats revised them.