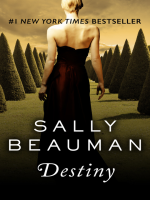 Sally Beauman's international bestseller sweeps across decades and continents to tell a spellbinding story of star-crossed loveEdouard's story begins in London in 1940. At fourteen, he's the son of a baron and second in line to a dazzling jewelry dynasty.H\u00e9l\u00e8ne's story begins in Alabama in 1950. An only child, she lives with her mother in a trailer park and dreams of escaping her hardscrabble life.Their paths cross in France, and a brief, passionate affair follows. They are separated by fate, and that seems to be the end. But Edouard cannot devote his life to business . . . not before finding H\u00e9l\u00e8ne again.Destiny is Sally Beauman's masterpiece about a man and a woman and their once-in-a-lifetime love.