Crocodile Encounters: And More True Stories of Adventures with Animals 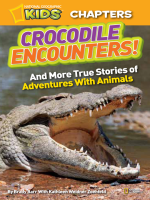 The first in a line of adventures within the National Geographic Kids Chapters series, Crocodile Encounters will surely prove to be one of the most exciting. Follow along with National Geographic explorer Brady Barr as he crawls into a muddy hole just barely big enough for his shoulders, and comes face to face with thirteen crocodiles! Laugh out loud as you learn how to catch a crocodile using shoe laces and underpants. Read in anticipation to find out what happens when you put a 600-lb crocodile on an airplane in just a flimsy wooden crate. These action-packed stories and more will engage readers and inspire them to go out and explore their own world.