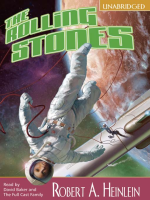 Though it doesn't seem likely for twins to have the same middle name, it's clear that Castor and Pollux Stone both have "Trouble" in that spot on their birth certificates. But anyone who's met their grandmother Hazel will know they came by it honestly.

Join the Stone twins for a laugh-filled ride as they connive, cajole, and bamboozle their way across the Solar System in the company of the most high-spirited and hilarious family in all of science fiction. This light-hearted tale has some of Heinlein's sassiest dialogue. Oddly enough, it's also a true example of family values—for when you're a Stone, your family is your highest priority.