The Wit and Wisdom of Ted Kennedy 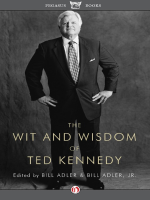 The mantras and political philosophies of Ted Kennedy, collected by the editor of the New York Times best-selling The Kennedy Wit

A collection of quotations and philosophies from Ted Kennedy, grouped thematically in categories ("Words of Inspiration," "On the Kennedy Family and its Legacy," "Personal Reflections," "On Religion and Public Life," "Lighter Movements"). Each section includes a brief introduction by the editor to set off the group quotes, which range from charming one-liners to Kennedy's letter to Pope Benedict that President Obama hand-delivered to the Vatican in July 2009.