Democracy Inc: How Members of Congress Have Cashed In On Their Jobs 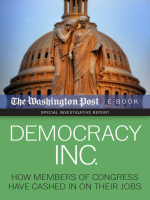 An investigation into how legislators have taken advantage of their positions—and of weak financial disclosure laws—to make millions. After a historic financial crisis led Congress to unprecedented economic intervention, the Pulitzer Prize-winning Washington Post began an investigation that pierced the secrecy of the deeply flawed financial disclosure system that governs the 535 men and women who draft the nation's laws. Members of Congress directed millions of dollars to infrastructure projects near their residences and businesses, in some cases paving roads in front of their houses. They made major trades in the stocks of companies pressing them for legislation. They wrote laws favoring industries in which they were invested. They sponsored bills on which their own family members were paid to lobby. All of it is legal under the rules Congress has written for itself. Democracy Inc. shows the consequences of this system.