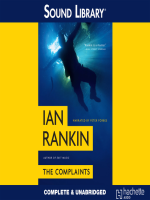 Description
Nobody likes The Complaints--they're the cops who investigate other cops. It's a department known within the force as "The Dark Side, " and it's where Malcolm Fox works. His new case: investigate a cop named Jamie Breck. As Fox takes on the job, he learns that there's more to Breck than anyone thinks--dangerous knowledge, especially when a vicious murder takes place far too close to home.
Also in This Series