Passing Strange: A Gilded Age Tale of Love and Deception Across the Color Line 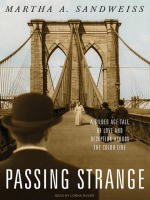 Clarence King is a hero of nineteenth-century western history. Brilliant scientist and witty conversationalist, bestselling author and architect of the great surveys that mapped the West after the Civil War, King was named by John Hay "the best and brightest of his generation." But King hid a secret from his Gilded Age cohorts and prominent family in Newport: for thirteen years he lived a double life---as the celebrated white explorer, geologist, and writer Clarence King and as a black Pullman porter and steelworker named James Todd. The fair, blue-eyed son of a wealthy China trader passed across the color line, revealing his secret to his black common-law wife, Ada King, only on his deathbed.

Martha A. Sandweiss, a noted historian of the American West, is the first writer to uncover the life that King tried so hard to conceal from the public eye. She reveals the complexity of a man who while publicly espousing a personal dream of a uniquely American "race," an amalgam of white and black, hid his love for his wife and their five biracial children. Passing Strange tells the dramatic tale of a family built along the fault lines of celebrity, class, and race---from the "Todd's" wedding in 1888 to the 1964 death of Ada, one of the last surviving Americans born into slavery, and finally to the legacy inherited by Clarence King's granddaughter, who married a white man and adopted a white child in order to spare her family the legacies of racism.

A remarkable feat of research and reporting spanning the Civil War to the civil rights era, Passing Strange tells a uniquely American story of self-invention, love, deception, and race.