Dracula the Un-Dead: The Sequel to the Original Classic 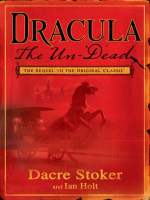 Description
From the international bestselling author of Dracul comes the authoritative sequel to Bram Stoker's original horror classic. London, 1912 . A quarter of a century after Count Dracula "crumbled into dust," Quincey Harker--the son of Jonathan and Mina Harker--leaves law school to pursue a career on stage, only to stumble upon the troubled production of Dracula , directed and produced by Bram Stoker himself. As the play plunges Quincey into the world of his parents' terrible secrets, death begins to stalk the original band of heroes that defeated Dracula a quarter-century ago . Could it be that the count survived and is now seeking revenge? Or is there another, far more sinister force at work whose relentless purpose is to destroy anything and anyone associated with Dracula, the most notorious vampire of all time... Dracula the Un-Dead is the true sequel to Bram Stoker's classic novel, written by his direct descendant and a well-known Dracula historian. Dracula the Un-Dead provides answers to all the questions that the original novel left unexplained, as well as new insights into the world of iniquity and fear lurking just beneath the surface of polite Victorian England.
Also in This Series