Islands in the Sky »

Islands in the Sky 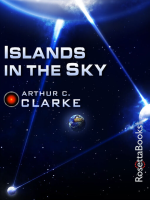 The technologically groundbreaking novel of space exploration from the only science fiction author nominated for a Nobel Peace Prize. Roy Malcolm has always been fascinated by space travel. And when he wins a voyage to the Inner Space Station as a game show prize, he's sure it's the trip of a lifetime. Before long, Roy is taken in by the young crew—and shares their adventures and lives. One of Arthur C. Clarke's earliest novels, Islands in the Sky is particularly noteworthy for its description of geostationary communications satellites. While this technology was nonexistent during the writing of this book, it later became commonplace—and Clarke is credited with the first practical descriptions of such technology. This book is compelling not just as a fictional tale, but as an example of the prescient power of Clarke's vision. "[Clarke is] one of the truly prophetic figures of the space age." —The New Yorker