Good in bed: a novel 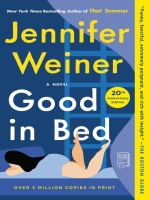 Description
"At first my eyes wouldn't make sense of the letters. Finally, they unscrambled." Loving a Larger Woman, "said the headline, by Bruce Guberman. Bruce Guberman had been my boyfriend for just over three years, until we'd decided to take a break three months ago. And the larger woman, I could only assume, was me."

Cannie Shapiro never wanted to be famous. The smart, sharp, plus-sized pop culture reporter was perfectly content writing about other people's lives on the pages of the "Philadelphia Examiner." But the day she opens up a national women's magazine to find out that her ex-boyfriend has been chronicling their ex-sex life is the day her life changes forever.

For the previous twenty-eight years, things had been tripping along nicely for Cannie. Sure, her mother's come charging out of the closet, and her father's long since dropped out of her world. But she