House of Stone: A Memoir of Home, Family, and a Lost Middle East 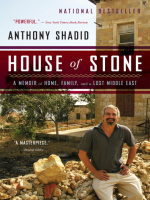 "Wonderful . . . One of the finest memoirs I've read." — Philip Caputo, Washington Post In the summer of 2006, racing through Lebanon to report on the Israeli invasion, Anthony Shadid found himself in his family's ancestral hometown of Marjayoun. There, he discovered his great-grandfather's once magnificent estate in near ruins, devastated by war. One year later, Shadid returned to Marjayoun, not to chronicle the violence, but to rebuild in its wake. So begins the story of a battle-scarred home and a journalist's wounded spirit, and of how reconstructing the one came to fortify the other. In this bittersweet and resonant memoir, Shadid creates a mosaic of past and present, tracing the house's renewal alongside the history of his family's flight from Lebanon and resettlement in America around the turn of the twentieth century. In the process, he memorializes a lost world and provides profound insights into a shifting Middle East. This paperback edition includes an afterword by the journalist Nada Bakri, Anthony Shadid's wife, reflecting on his legacy. "A poignant dedication to family, to home, and to history . . . Breathtaking." — San Francisco Chronicle "Entertaining, informative, and deeply moving . . . House of Stone will stand a long time, for those fortunate enough to read it." — Telegraph (London)