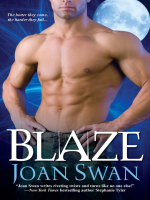 An FBI agent with special abilities encounters dangers both professional and personal in this romantic thriller by a New York Times–bestselling author. Ever since FBI agent Keira O'Shay started tracking a young boy named Mateo, she's felt a connection even her empathic abilities can't explain. She needs to save Mateo from the cult leader holding him hostage. Nothing can interfere with that—not even the reappearance of Luke Ransom, the hot-as-hell fire captain she regrets walking out on. Losing Keira left Luke vulnerable—in every way. When they were together, the powers they possessed were mysteriously enhanced. But it's the sexy, surprising woman beneath the tough exterior that Luke really misses. Even if she betrayed him outright. And even if agreeing to help her uncover a government conspiracy means watching his life and his heart go up in flames again . . . Blaze is an intense tale of romantic suspense with a paranormal edge, from the author who also writes under the name Skye Jordan—and whose "gutsy, jaw-dropping style will have readers talking" (Larissa Ione, New York Times–bestselling author). "Joan Swan writes riveting twists and turns like no one else." —Stephanie Tyler, New York Times–bestselling author of the Hold Trilogy