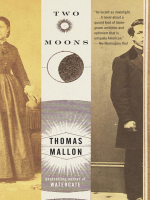 Description
Astronomy, politics, and romance join forces in this novel from the writer John Updike has called "one of the most interesting American novelists at work."

It's the spring of 1877 in Washington, D.C., and at the U.S. Naval Observatory, Hugh Allison has conceived a secret ambition: to project an image through time and space. But his plan takes on urgent life only when the mathematically gifted Cynthia May enters his orbit as one of the observatory's human "computers." A Civil War widow whose beauty has been shadowed by worry and poverty, Cynthia reluctantly falls in love with the younger Hugh, who missed the war that has haunted her life. But the fate of their love affair -- and of Hugh's heavenly vision -- may be out of their hands, decided instead by an astrologer and by the actions of a dangerously magnetic politician who wields his power over a Senate convulsed by Reconstruction and a wildly disputed presidential election.