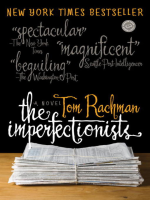 Description
From the author of The Italian Teacher, this acclaimed debut novel set in Rome follows the topsy-turvy lives of the denizens of an English language newspaper.

Fifty years and many changes have ensued since the paper was founded by an enigmatic millionaire, and now, amid the stained carpeting and dingy office furniture, the staff’s personal dramas seem far more important than the daily headlines. Kathleen, the imperious editor in chief, is smarting from...
Also in This Series