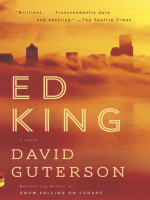 Description
A sweeping, propulsive, darkly humorous new novel by the best-selling author of Snow Falling on Cedars: a story of destiny, desire, and destruction that reimagines Sophocles's Oedipus Rex for our own era.

In Seattle in 1962, Walter Cousins, a mild-mannered actuary—"a guy who weighs risk for a living"—takes a risk of his own, and makes the biggest error of his life. He sleeps with Diane Burroughs, the sexy, not-quite-legal British au pair who's taking care of his children for the summer. Diane gets pregnant and leaves their baby on a doorstep, but not before turning the tables on Walter and setting in motion a tragedy of epic proportions. Their orphaned child, adopted by an adoring family and named Edward Aaron King, grows up to become a billionaire Internet tycoon and an international celebrity—the "King of Search"—who unknowingly, but inexorably, hurtles through life toward a fate he may have no power to shape.

An instant classic—David Guterson's most daring and dazzling novel yet—that brings a contemporary urgency to one of the greatest stories of all time.
This eBook edition includes a Reading Group Guide.
Also in This Series