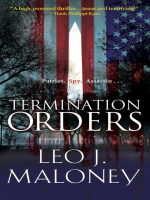 From a Black Ops veteran and author of Deep Cover, a military thriller about a retired CIA agent forced back into action by a lethal conspiracy.

Once a trained killer for the CIA, Dan Morgan has built a new life for himself. But when he receives a desperate plea from his former Black Ops partner—reportedly killed in a foreign battle zone—he flies to help. It should be a routine mission, extracting a human asset from the region. But it's not routine; it's an ambush. Now Morgan is running for his life, holding crucial evidence. With his contacts dead and family in danger, Morgan must take on a full-scale conspiracy in the highest echelons of a vast global network that plays by its own rules—when it suits them. For Dan Morgan, it's about to come to an end in Washington, D.C., on a national stage, in the crosshairs of a killer...

"A must-read thriller of torture, assassination, and double agents, where nothing is as it seems."—Jon Renaud, author of Dereliction of Duty

"A high-powered thriller...tense and terrifying!"—Hank Phillippi Ryan, USA Today–bestselling author of The First to Lie

"An outstanding thriller that rings with authenticity."—John Gilstrap, New York Times – bestselling author of Hellfire
Also in This Series