Death in the Devil's Acre »

Death in the Devil's Acre 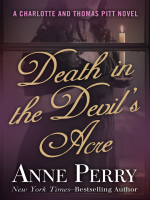 The sleuthing couple pursues a serial killer through Victorian London in an exciting entry in the "unfailingly rewarding" New York Times–bestselling series (The New York Times).

A serial killer is loose in the slums of Devil's Acre. The murders are brutal, but it is the killer's grisly signature that shocks even Inspector Thomas Pitt, no stranger to death and violent crime. The victims are stabbed and sexually mutilated. When Pitt recognizes one of the victims as a blackmailing footman from a case on Callander Square, his investigation takes him from the brothels to the high reaches of Victorian society and into a world where upper-class women descend to depravity to relieve their boredom. Despite Pitt's warnings, his wife, Charlotte, pursues her own investigation. With the help of her sister Emily, Lady Ashworth, Charlotte reenters the elegant drawing rooms of Callander Square to find out more about the former footman who, Pitt discovers, owned an exclusive high-class whorehouse with—what else—exclusive high-class whores.

As Pitt and Charlotte approach the same dangerous conclusion from differing paths, no one is spared—not even Pitt.