The Crimson Corsair and the... »

The Crimson Corsair and the Lost Treasure of Count Dooku 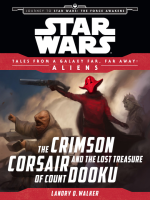 Description
A long time ago, in a galaxy far, far away, a cruiser transporting precious cargo for the traitorous Count Dooku's during the Clone Wars crashed into the Sea of Sand on the planet Ponemah, leaving its treasures buried. Years later, Captain Sidon Ithano, known as the Crimson Corsair, and his pirate crew receive a signal from the downed cruiser. The pirates set off after whatever lies beneath the sand, but the hidden ship's signal has gone far and wide. Can the Crimson Corsair find the buried treasure before his rivals? Don't miss this ebook adventure and more from TALES FROM A GALAXY FAR, FAR AWAY: ALIENS, available now!
Also in This Series