The Princess Wore Plaid: A Novella 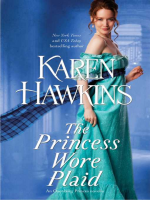 Description
Sizzling Scottish romance abounds in this e-novella in the Princes of Oxenburg series, a Cinderella spinoff to New York Times bestselling author Karen Hawkins's delightful Duchess Diaries series.A princess once bejeweled but now tattered... Royal princess Tatiana Romanovin is the beautiful, wealthy, and spoiled favorite of the King of Oxenburg. On her way to her cousin's wedding in the Scottish highlands, Tatiana's carriage is involved in an accident and, wounded, she is separated from her servants and possessions. Tatiana soon finds herself alone in an inn with no servants, no funds, and no proof of her identity. Destitute, she accepts the offer from a sympathetic (but unbelieving) innkeeper to work for her room and board while she waits for an answer to the missive she's sent to her cousin Prince Nikolai. With no other recourse, Tatiana scrubs floors and washes dirty linens, waiting for her prince to come... A proud lord once lost and now found... After a brutal, bloody battle with the French Navy left Lord Buchan limping and surly, and abandoned by his betrothed because of his injuries, his lordship hides away at his manor house in the countryside. He leaves only once a week to eat at the local inn, drawn by the expert cooking of the innkeeper's wife. One day, Buchan arrives to find that the innkeeper has a new servant, a beautiful scullery maid with a queenly air and flashing green eyes that leave him breathless and increasingly aware of his lonely existence... Love may find them yet... The challenge of winning his way into Tatiana's heavily protected heart stirs Buchan back to life...but can he and his scars—and broken heart—win a proud princess whose only goal is to leave Scotland and return to the court where she's the crowning jewel?
Also in This Series