As Good As She Imagined »

As Good As She Imagined: The Redeeming Story of the Angel of Tucson, Christina-Taylor Green 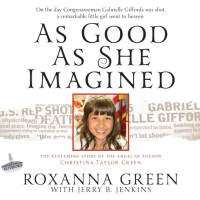 On the day Congresswoman Gabrielle Giffords was shot, a remarkable little girl went to heaven. This is the story of a mother's quest for peace in the midst of unspeakable heartache. By the time the shooting ended on that cloudless January day in front of a Tucson grocery store, 19 innocent people lay wounded, dead, or dying. Among the gravely wounded was U.S. Congresswoman Gabrielle Giffords. The youngest among the six who died was a little girl whose dark eyes and smiling face would soon appear on newscasts around the world. Some would refer to her as "The Angel of Tucson." Christina-Taylor Green entered this world on September 11, 2001--a ray of sheer joy on a dark day of madness, shock, and sorrow. On January 8, 2011, another act of madness tore her from this world. She was talented. She was popular. She was beautiful. And she was nine. As Good As She Imagined is her mother's remarkable account of her life, death, and inspiring legacy. With the help of New York Times best-selling author Jerry B. Jenkins, Roxanna Green shares her family's journey of faith and their quest for redemption amid unspeakable tragedy. It is a story that touched a nation and the world--and a story that will inspire you.