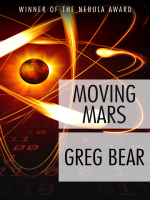 A galaxy-altering scientific breakthrough on Mars inspires treachery and revolution in this Nebula Award–winning science fiction epic. The child of one of the oldest, most revered family-corporate units on colonized Mars, Casseia Majumdar has spent her entire life in the tunnels that run beneath the surface of her homeworld. As a young college student in 2171, the fifty-third year of the Martian settlement, she experiences a profound political awakening, and her embrace of radical activism only intensifies following a failed diplomatic mission to Earth. As she rises up through the political ranks back on Mars—with tensions increasing between an oppressive "Mother Earth" and her rebellious "Red Rabbit" children—Casseia soon realizes that an enlightened ideology alone will not save her planet and its people. But it is a staggering scientific discovery by Martian physicist Charles Franklin—Casseia's mentor and former lover—that will ultimately reveal the depths of the perfidy of the "Terries," forcing an imperiled civilization to alter forever the map of the universe. A two-time winner of the Nebula Award and a multiple Hugo and Arthur C. Clarke Award nominee, the great Greg Bear has been called "the complete master of the grand scale sf novel" (Booklist). His Moving Mars is a masterful extrapolation of contentious humanity's possible future and a modern classic to be shelved alongside the acclaimed Mars novels of Ben Bova and Kim Stanley Robinson. It's "as good as hard science fiction gets" (The Oregonian).