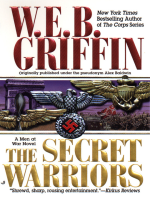 Description
Last year, Griffin's millions of fans cheered the rediscovery of The Last Heroes, volume one of Men at War, his epic of battle and espionage, originally published under the pen name Alex Baldwin and never before available in hardcover. Said Kirkus Reviews, ?The Last Heroes is a rousing to-the-ends-of-the-earth start for an absorbing narrative on our shadow warriors.'It is 1942. In Washington, D.C., the OSS, under FDR and ?Wild Bill? Donovan, escalates its tactical war, and plunges into worldwide covert operations. In London, a difficult and exiled de Gaulle disrupts major invasion plans, and it is up to the OSS to force the General's hand. In the Belgian Congo, a desperate air maneuver drops OSS agents into Africa, with the aim of smuggling out uranium ore essential to the arms race. In Morocco, OSS men plan a rendezvous with anti-Nazi Germans in an attempt to obtain critical weapons secrets.Everywhere, adventure crackles, fueled by the narrative realism, rich characters, and that special flair for the military heart and mind that have always made Griffin's novels so loved. The Secret Warriors is further proof that ?Griffin rates among the best storytellers in any genre? (Phoenix Gazette).
Also in This Series