The Legend of Zorro »

The Legend of Zorro 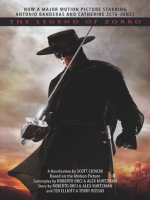 THE LEGEND LIVES ON!

Zorro behind the mask is a daring defender of freedom and justice, wielding sword and whip with unparalleled skill in defense of the common people's cause.

Zorro without the mask is Don Alejandro de la Vega, wealthy landowner and as much of a family man as his charge will allow.

As California stands on the brink of statehood, Alejandro is not sure who he will be when the need for the mask fades, but his lovely wife, Elena, is certain he will be the devoted husband and father she and their son, Joaquin, have patiently waited for.

But ruthless men in a deadly conspiracy of power have different ideas. As they threaten the future of a still-young nation, they also set Alejandro's two lives in collision, drawing his beloved Elena into a perilous world of shadows and lies. Could the mask ultimately cost the one they call Zorro everything and everyone he holds most dear?

Or will the Zorro legacy and de la Vega family prevail?