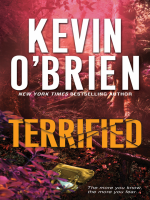 A single mother with a secret past will do anything to save her son in this "genuine page-turner" by the New York Times bestselling author (Seattle Times). Megan Keeslar died years ago—or so everyone believes. In fact, she disappeared to escape her sadistic husband, Glenn. When dismembered body parts were found near their home, Glenn was convicted of his wife's murder. And Megan, terrified for her unborn child's safety, never came forward with the truth . . . After building a new life in Seattle, Megan's son Josh knows nothing about her past. But someone does. First, there are anonymous emails and threats, just as she learns that Glenn has been released from prison. Then the unthinkable happens: a masked man breaks into their home and abducts Josh. To save her son, Megan must put herself at the mercy of a maniac. Is Glenn a cold-blooded killer determined to destroy her world, or is the truth even more twisted? Megan thought she knew fear, but her nightmare is only beginning . . .