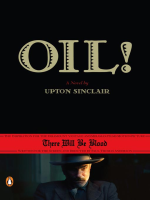 Description
The classic novel that inspired the Acadamy award-winning film, There Will Be Blood.

Penguin Books is proud to now be the sole publisher of Oil!, the classic 1927 novel by Upton Sinclair. After writing The Jungle, his scathing indictment of the meatpacking industry, Sinclair turned his sights on the early days of the California oil industry in a highly entertaining story featuring a cavalcade of characters including senators, oil magnets, Hollywood film starlets, and a crusading evangelist.

This lively and panoramic book, which was recently cited by David Denby in the New Yorker as being Sinclair's "most readable" novel, is now the inspiration for the Paramount Vantage major motion picture, There Will Be Blood. It is the long-awaited film from Paul Thomas Anderson, one of the most admired filmmakers working today whose previous movies, Boogie Nights and Magnolia were both multiple Academy Award nominees. The movie stars Oscar-winner Daniel Day-Lewis (Gangs of New York, My Left Foot) and Paul Dano (Little Miss Sunshine).

Paramount Vantage will be releasing the film in New York and Los Angeles on December 26, 2007 and go nationwide in January. This is the same company responsible for Babel and A Mighty Heart and the current releases, Into the Wild, Margot at the Wedding, and The Kite Runner.

As wars rage on in the oil region and as anxiety over natural resources rise, the subject of this book, which celebrates its 80th anniversary in 2007, is more timely than ever.