The Ghost and the Goth »

The Ghost and the Goth 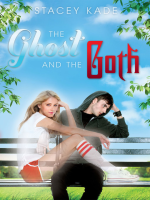 Description
After a close encounter with the front end of a school bus, Alona Dare goes from Homecoming Queen to Queen of the Dead. Now she's stuck as a spirit (DON'T call her a ghost) in the land of the living with no sign of the big, bright light to take her away. To make matters worse, the only person who might be able to help her is Will Killian, a total loser outcast who despises the social elite. He alone can see and hear (turns out he's been "blessed" with the ability to communicate with the dead), but he wants nothing to do with the former mean girl of Groundsboro High. Alona has never needed anyone for anything, and now she's supposed to expose her deepest, darkest secrets to this pseudo-goth boy? Right. She's not telling anyone what really happened the day she died, not even to save her eternal soul. And Will's not filling out any volunteer forms to help her cross to the other side. He only has a few more weeks until his graduation, when he can strike out on his own and find a place with less spiritual interference. But he has to survive and stay out of the psych ward until then. Can they get over their mutual distrust-and the weird attraction between them-to work together before Alona vanishes for good and Will is locked up for seeing things that don't exist?
Also in This Series