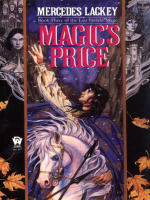 Valdemar—the once-peaceful kingdom protected by the magic of its Herald-Mages—is now besieged on all fronts. The king lies near death, the neighboring land of Karse wages a relentless war against Valdemar, and the forces led by a master of dark forbidden magic are massing to strike the final devastating blow against the kingdom.

And Vanyel, the most powerful Herald-Mage Valdemar has even known, has become the primary target of the evil which is reaching out to poison all the land.

With all his fellow mages slain, Vanyel alone remains to defend his people against the dark master’s army. Yet a dream vision has revealed to Vayel the fate which awaits should he and his Companion Yfandes take up the dark master’s challenge.

And if either Vanyel or Yfandes falters, the dream will become a horrifying reality in which both Valdemar and its last Herald-Mage must pay the ultimate price.
Also in This Series