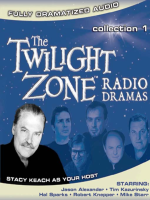 Collection 1 includes: “The Obsolete Man,” “Time Enough at Last,” “A Nice Place to Visit,” “The Last Rites of Jeff Myrtlebank,” and “The Lonely.”

The Twilight Zone Radio Dramas will keep you glued to the edge of your seat, whether listening in your home or in your car. Each tale unites classic stories and musical scores with contemporary sound effects and readings by distinguished guest stars.

Adapted for audio from original scripts written for the television show created by Rod Serling that aired in the 1960s, these radio dramas feature music and sound effects and a distinguished lineup of guest stars. Serling’s widow, Carol Serling, praised the radio adaptations, calling them “truly astounding.”