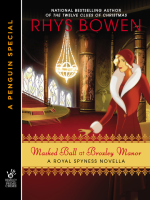 A delectable prequel to the national bestselling Royal Spyness mysteries featuring Lady Georgiana Rannoch—thirty forth in line to the throne, and England's poorest heiress. At the end of her first unsuccessful season out in society, Lady Georgiana has all but given up on attracting a suitable man—until she receives an invitation to a masked Halloween ball at Broxley Manor. Georgie is uncertain why she was invited, until she learns that the royal family intends to marry her off to a foreign prince, one reputed to be mad. When the prince, dressed as the devil, rescues her from an embarrassing situation at the ball, Georgie is surprised to find her unwanted suitor to be a dashing, charming man—especially when he pulls her aside and gives her the kiss of a lifetime. But as the time comes for the unmasking, Georgie's rescuer vanishes and the party is thrown into chaos, making it clear that everything at Broxley Manor is not as it appears...Includes a preview of the latest Royal Spyness mystery, The Twelve Clues of Christmas, available November 2012.