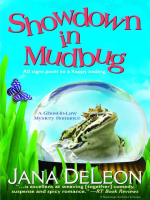 Who killed Helena Henry? The shorter list may be who didn't want her dead.Psychic Raissa Bordeaux thought she'd left her former life behind, but when a child is kidnapped, she risks her secret identity by offering the police help with the case. New Orleans Detective Zach Blanchard doesn't believe in psychic hooey and is certain Raissa didn't get her facts about the case from a crystal ball. He suspects her of something besides being the most intriguing and attractive woman he's ever come across. But when Raissa's secrets put her in danger, can Zach convince her to trust him with the truth before it's too late?