The Collected Stories of... »

The Collected Stories of Stefan Zweig 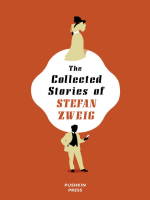 Description
Twenty-two classic short stories of love and death, betrayal and hope—from a storytelling master who has been hailed as “the Updike of his time” (New York Observer)   In this magnificent collection of Stefan Zweig's short stories, the very best and worst of human nature is captured with sharp observation, understanding, and vivid empathy. Ranging from love and death to faith restored and hope regained, these stories present a master at work, at the top of his form. Perfectly paced and brimming with passion, these twenty-two tales from a master storyteller of the twentieth century are translated by the award-winning Anthea Bell.   Included: Forgotten Dreams In the Snow The Miracles of Life The Star Above the Forest A Summer Novella The Governess Twilight A Story Told in Twilight Wondrak Compulsion Moonbeam Alley Amok Fantastic Night Letter from an Unknown Woman The Invisible Collection Twenty-Four Hours in the Life of a Woman Downfall of the Heart Incident on Lake Geneva Mendel the Bibliophile Leporella Did He Do It? The Debt Paid Late
Also in This Series