Memoirs of a Dance Hall Romeo »

Memoirs of a Dance Hall Romeo: A Novel 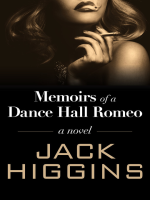 Description
A New York Times–bestselling author delivers a different kind of thriller—in which the artist as a young man is unleashed upon the world.

It's 1949, and young Oliver Shaw has just been demobilized out of the British army. After two lonely years of battling little more than paperwork and boredom, he's ready to start living. But first he has to figure out just what that means.

So begins the uniquely comic adventure of a boy who yearns to be a man—in every way possible. While trying to find success as a writer, Oliver gamely tries to teach in a broken-down slum school during the day, and at night desperately tries to learn as much as possible about wine, women, and . . . more women—with results that will forever change him for both the better and the slightly worse.

Warm, funny, and brimming with mischief, Memoirs of a Dance Hall Romeo is a coming-of-age tale by one of modern fiction's greatest storytellers.
This ebook features an illustrated biography of Jack Higgins including rare images and never-before-seen documents from the author's personal collection.
Also in This Series