The Goldstone Report: The Legacy of the Landmark Investigation of the Gaza Conflict 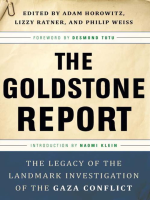 The Goldstone Report is one of the most controversial UN reports ever published. It alleges that both Israel and Hamas committed atrocities when Israel invaded Gaza in January 2009 as a part of Operation Cast Lead. Justice Richard Goldstone, a celebrated South African and Jewish human rights lawyer, oversaw the UN fact-finding mission after the invasion. What Goldstone found, and later published, caused a maelstrom within Israel and the international community at large. Goldstone was demonized by many who claimed bias, intimating the report unfairly vilified Israel. Though the findings are of enormous historical, political and moral significance, few have actually read the document in its entirety—thus the furious political debate that mushroomed in the wake of its publication has supplanted any true understanding of the report’s discoveries. The Goldstone Report: The Landmark Investigation of the Gaza Conflict of 2008-2009 will change this. Edited by three progressive American Jews, Adam Horowitz, Lizzy Ratner and Philip Weiss, The Goldstone Report is an edited and annotated edition of the report that contains analysis, original essays and a context for the debate.