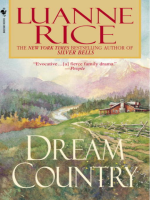 Description
NEW YORK TIMES BESTSELLER * "A moving story of love and reunion . . . an absolute joy to read . . . I finally put Dream Country down at 2 a.m. and almost called in sick the next day to finish it."-- Denver Post It was just an argument, one of hundreds Daisy Tucker must have had with her teenage daughter, Sage, over the years. But this one had ended differently, with Sage gone from their Connecticut home the next morning, leaving behind only a brief note: "I have to go." Daisy tried not to overreact, tried to remind herself this was different from what had happened thirteen years earlier to Sage's twin brother, Jake. This was different from a three-year-old boy disappearing in the canyons of Wyoming, never to be found. Sage was sixteen and resourceful. She would be found. Years ago Daisy had traveled to Wyoming's Wind River Mountains in search of inspiration for her art and had found a man with the wilderness inside him. James Tucker was a rancher, bound to the wild land he loved, and together he and Daisy created a small paradise for their family--until the day their little boy vanished without a trace. Now, as their daughter makes a dangerous cross-country pilgrimage to the father she longs for, Daisy will return to the place that took everything she had. . . . Filled with a wild and unpredictable beauty, Dream Country is a novel you'll never want to end--even as you can't wait to finish it.
Also in This Series