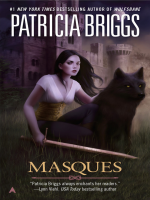 Description
Experience the fantasy and adventure of #1 New York Times bestselling author Patricia Brigg's first published novel--the thrilling start of the Sianim series... After an upbringing of proper behavior and oppressive expectations, Aralorn fled her noble birthright for a life of adventure as a mercenary spy. But her latest mission involves more peril than she ever imagined. Agents of Sianim have asked her to gather intelligence on the increasingly popular and powerful sorcerer Geoffrey ae'Magi. Soon Aralorn comes to see past the man's striking charisma--and into a soul as corrupt and black as endless night. And few have the will to resist the sinister might of Geoffrey and his minions. So Aralorn, aided by her enigmatic companion, Wolf, join the growing rebellion against the ae'Magi. But in a war against an enemy armed with the powers of illusion, how do you know who the true enemy is--or where he will strike next?
Also in This Series