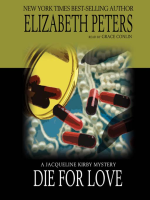 The annual Historical Romance Writers of the World convention in New York City is calling to Jacqueline Kirby, a Nebraska librarian who desperately desires some excitement. But all is not love and kisses at this august gathering of starry-eyed eccentrics and sentimental scribes. As far as Jacqueline is concerned, the sudden "natural" death of a gossip columnist seems anything but. And when she's approached by a popular genre star who fears for her own life, the resourceful Ms. Kirby quickly goes back to work...as a sleuth.

There's a sinister scenario being penned at this purple prose congregation. And when jealousy and passion are released from the boundaries of the printed page, the result can be murder.