The Best Advice I Ever Got »

The Best Advice I Ever Got: lessons from extraordinary lives 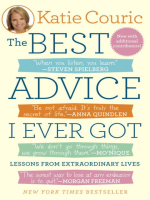 Description
What made the lightbulb go off for Malcolm Gladwell? What unexpected event made Meryl Streep who she is? What exactly proved to be Mario Batali's recipe for success? In this inspirational book, Katie Couric calls upon leaders and visionaries in the fields of politics, entertainment, sports, philanthropy, the arts, and business-all of whom share heartfelt, humorous, and useful insights about success and fulfillment. The Best Advice I Ever Got covers it all, from personal life (novelist Curtis Sittenfeld wisely suggests marrying someone less neurotic than you) to the workplace (Eric Schmidt of Google advises saying "yes" to any opportunity) to a combination of both (Chelsea Handler warns that you should never, ever sleep with your boss). These candid stories aren't just for those who are starting out, they're for those who are starting over, or just taking stock-they're reminders of what is important and how we can live our lives better every day. Assembled here is a virtual who's who of some of the world's most accomplished leaders, thinkers, and artists-from Super Bowl quarterbacks to successful CEOs, Colin Powell and Ken Burns to Barbara Walters and Beyonc . Here are lessons about hard work and humility, taking chances, dealing with criticism, following your passion, committing to something greater than yourself, and understanding the real meaning of success. Among the many contributions are financial guru Suze Orman on the benefits of doing what is right, not what is easy; quarterback Drew Brees on the shoulder injury that almost ended his career but wound up bringing him to New Orleans, where he used adversity as an opportunity; Mo'Nique, the Oscar-winning actress and comedian, on growing through life's challenges; and New York City mayor Mike Bloomberg on the importance of showing up early, which he illustrates through a story about his first job at a real estate office. Along the way, Katie Couric offers her own reflections on the good advice-as well as the mishaps along the way-that have guided her: from her early days as a desk assistant at ABC to her groundbreaking role as the first female anchor of the CBS Evening News . She reveals how the words of Thomas Jefferson helped her deal with her husband's tragic death from cancer, and the truism that encouraged her to leave the safe harbor of NBC's Today show for a new adventure at CBS. By turns amusing, empowering, and moving, the advice collected here provides tried-and-true wisdom for anyone who stands at a crossroads in life's journey-for graduates just starting out on a career path, workers facing a midlife challenge, or anyone thinking about making a change, taking a risk, or pulling off the proverbial leap into the great unknown. From the Hardcover edition.
Also in This Series