Louder Than Words: A Mother's Journey In Healing Autism 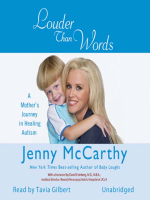 If someone you love is diagnosed with autism, Louder Than Words is the first book you should read.

One morning, Jenny McCarthy was having a cup of coffee when she sensed something was wrong. She ran into her two-year-old son Evan's room and found that he was having a seizure. In that moment, Jenny went from being the mother of an average toddler to being in the midst of a medical odyssey. Doctor after doctor misdiagnosed Evan until—after many harrowing, life-threatening episodes—one amazing doctor discovered that Evan suffered from autism. Though Evan finally had a diagnosis, Jenny didn't know what to do next and soon found herself alone, with no resources except her determination to help her son. She eventually realized that she'd have to become a detective. She spoke with numerous doctors, parents, governmental agencies, private foundations, and essentially earned a PhD in "Google research." At last, she discovered an intense combination of behavioral therapy, diet, and supplements that became the key to saving Evan from autism. In this book, she creates a roadmap for parents who are concerned about their own child. Jenny does more than just reveal the winning formula that worked for Evan. Her account shares the frustrations and joys of raising an autistic child and shows how, with love and determination, a parent can shape their child's life and happiness.