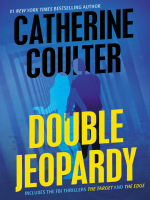 Description
The FBI thrillers The Target and The Edge, together for the first time in one volume.

The Target—Coulter “keeps readers guessing” (Booklist) as a little girl is pursued by men who prove as relentless as their motives are baffling. And FBI agents Savich and Sherlock must unravel the clues.

The Edge—In this “fast-paced thriller” (People), an FBI agent’s sister disappears after an attempted suicide. When Savich and Sherlock join the search, they discover a startling connection to a puzzling murder—and put their lives on the line to uncover the truth.
Also in This Series