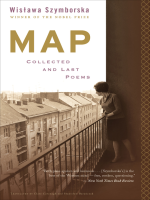 "Nobel laureate Szymborska's gorgeous posthumous collection . . . includes more than 250 poems . . . This is a brilliant and important collection."—Booklist (starred review) One of Europe's greatest recent poets is also its wisest, wittiest, and most accessible. Nobel Prize winner Wislawa Szymborska draws us in with her unexpected, unassuming humor. Her elegant, precise poems pose questions we never thought to ask. "If you want the world in a nutshell," a Polish critic remarks, "try Szymborska." But the world held in these lapidary poems is larger than the one we thought we knew. Carefully edited by her longtime, award-winning translator, Clare Cavanagh, the poems in Map trace Szymborska's work until her death in 2012. Of the approximately two hundred and fifty poems included here, nearly forty are newly translated; thirteen represent the entirety of the poet's last Polish collection, Enough, never before published in English. Map is the first English publication of Szymborska's work since the acclaimed Here, and it offers her devoted readers a welcome return to her "ironic elegance" (The New Yorker). "Both plain-spoken and luminous . . . Szymborska's skepticism, her merry, mischievous irreverence and her thirst for the surprise of fresh perception make her the enemy of all tyrannical certainties. Hers is the best of the Western mind—free, restless, questioning."—The New York Times Book Review "Vast, intimate, and charged with the warmth of a life fully imagined to the end, there's no better place for those unfamiliar with her work to begin."—Vogue "An extraordinary and vital summation of Szymborska's decidedly modest output."—Literary Hub