All Corvettes Are Red »

All Corvettes Are Red: Inside the Rebirth of an American Legend 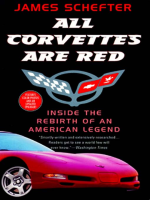 No American car carries the mystique of the Corvette, and early in 1997, General Motors unveiled the stunning fifth-generation Corvette to universal acclaim. But GM's triumph was hard-won. The legendary sports car had nearly fallen victim to internal company politics and a squeeze on profits. This book reveals the inside story of the people who saved and reinvented the Corvette.