The Man Called Cash: The Life, Love, and Faith of an American Legend 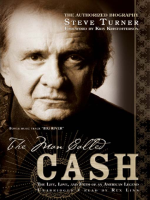 The legendary Johnny Cash's remarkable story is captured in this exclusive authorized biography.

"The Master of Life's been good to me. He has given me strength to face past illnesses, and victory in the face of defeat. He has given me life and joy where others saw oblivion...Life and love go on. Let the music play."—Johnny Cash

One of the most influential figures in American music and pop culture, Johnny Cash is an icon to people of all ages. In Cash's first-ever authorized biography, author Steve Turner sifts the man from the legend and presents a picture of the often contradictory figure with unflinching honesty.

A poor sharecropper's son from Arkansas, Cash embarked in the 1950s on a music career that took him to the heights of fame and wealth but also to the depths of addiction and despair. From these tensions Johnny Cash created a haunting music, exploring the dark side of himself, and others, in a voice that sometimes sounded as old as the Grand Canyon.

The Man Called Cash chronicles his career, his love for June Carter Cash, his struggles, and his triumphs. Johnny Cash put his soul into his music, drawing on his demons, his faith, his pain, and his joy to become, to many, the voice of truth.