A Hippo in Our Yard »

A Hippo in Our Yard 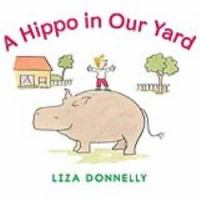 Description
When Sally informs her mom that there is a hippo in the yard, Sally’s mother is dismissive. “I don’t think so, dear,” she tells her daughter, barely looking up from her lunch. “I will give it some lettuce,” Sally says, grabbing a leaf from her mom’s bowl. Hippo is happy, but now the tiger in the tree is hungry. Sally's father is also disbelieving, so Sally just feeds the big cat some tuna. As with her parents, Sally’s sister is unmoved by her tale of zebras in the garage, and even Nana refuses to set her knitting aside when Sally tells her about bears in the hammock. Meanwhile, the phone rings, and the family is in for a shock.  Zoo animals are on the loose! A frantic search finds Sally atop a hippo in their yard, along with several other satisfied animal friends.
Also in This Series