Acts of Courage: Laura Secord and the War of 1812 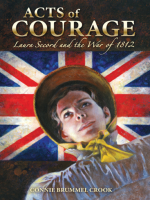 The story of Laura Ingersoll Secord, from her early days in Massachusetts and her family’s immigration to Upper Canada to her part in the War of 1812, when she rescued her injured husband on the field of battle and undertook a dangerous twenty mile trek to warn the British commander of an impending American attack on the British outpost at Beaver Dams.

She had been running, stumbling, walking for sixteen hours. It seemed that every muscle was screaming in pain. She did not even stop to check the new wound. When she reached the top of the hill, she stopped abruptly, trembling at an unexpected sight.Clusters of tents and groups of men around campfires were silhouetted against the sky.In Acts of Courage, Connie Brummel Crook dramatizes the life of one of Canada’s most enduring heroines, Laura Secord. From young Laura Ingersoll’s early days in Great Barrington, Massachusetts, amidst the turmoil that followed the American Revolutionary War, the story outlines her father’s difficult decision to move his family to Upper Canada. Laura’s subsequent meeting and courtshipwith James Secord is described against the backdrop of homesteading in the Niagara Peninsula and of enduring the imminent threat of American invasion. These first sections of the book provide the background for Laura’s courageous rescue of her husband from the battlefield at Queenston Heights, and her even more amazing trek to warn Col. FitzGibbon of the American’s secret plans to attack the British outpost at Beaver Dams. Laura’s extraordinary life, peopled with characters like Joseph Brant and Col. Fitzgibbon is given even more poignancy and interest by the author’s inventive and surprising characterization of the young FitzGibbon, by her acute eye for historical detail, and through her insights into the character of a young woman whose acts of courage have captured the imagination of generations of young Canadians.