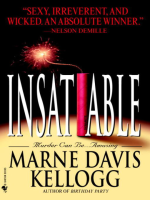 Description
A sweeping novel of suspense and intrigue-played out against the glamorous playgrounds of the rich; starring a beautiful and mysterious woman who leaves a path of death and destruction in her wake.
Jacqueline du Fidelio is a portrait painter with an international reputation and a dark secret in her past. Loyal only to her butler, closest friend, and confidant, the snobbish, neurotic, and completely amoral Nigel Weatherby-Smith, Jacqueline is fiercely independent—until it comes to affairs of the heart. Her penchant for toxic romantic involvements draws her to the worst kinds of men-from the rakishly unreliable and very married Ryder McCormick, her mother's former lover who has enthralled her since childhood, to Armand Weil, a debonair, fabulously wealthy art dealer who sweeps her off her feet, promises to take care of her forever, and deserts her at the worst possible moment. Junior Hammond, the sybaritic, obese, and uncultured heir to the Hammond oil fortune, finally succeeds in winning her hand in marriage. But like Jacqueline's other liaisons, the romance is soon wrapped in deadly shadows as members of the Hammond family begin to die in mysterious ways whenever Jacqueline is on the scene.
Is Jacqueline the innocent victim of careless, uncaring men and circumstances beyond her control, or is she a dangerous manipulator, ruthlessly using her lovers to ensure her own survival? Does her apparent fragility actually mask a cold, lethal core, an insatiable need to prove her invulnerability?
Taking readers from the lush hunt country of Virginia to New York City's glamorous art world, from the winter wonderland of Aspen, Colorado to the treacherous mountains of Nepal, Insatiable builds to almost unbearable suspense. It is only in the stunning final pages that we discover the terrible secret that haunts Jacqueline-and may have turned her into a killer.
Also in This Series