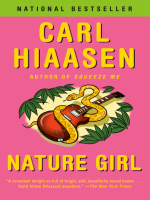 Description
Beware! Honey Santana is off her meds, reacting rapidly to the bad behavior of others. This time, the annoyer is a telemarketer from Texas. Honey's revenge? She invites Boyd Shreave on a paid ecotour of the Everglades, where a blue-eyed Seminole named Sammy Tigertail strums an electric guitar on a woe-begotten clump of shells, mangroves, and beer cans called Dismal Key. Soon Boyd and vengeance-crazed Honey are joined by a private eye with a red-hot video camera and a college girl who just wants to have fun. And with a brawling cast of lunatic men, desperate women, a skateboarding teen, and even a restless ghost all going native, who will protect the Everglades from the wild humans? --from Goodreads.com.
Also in This Series