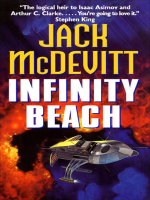 We are alone. That is the verdict, after centuries of Search for Extra-Terrestrial Intelligence missions and space exploration. The only living things in the Universe are found on the Nine Worlds settled from Earth, and the starships that knit them together. Or so it's believed, until Dr. Kimberly Brandywine sets out to find what happened to her clone-sister Emily, who, after the final, unsuccessful manned SETI expedition, disappeared along with the rest of her ship's crew.

Following a few ominous clues, Kim discovers the ship's log was faked. Something happened out there in the darkness between the stars, and she's prepared to go to any length to find answers. Even if it means giving up her career...stealing a starship...losing her lover. Kim is about to discover the truth about her sister -- and about more than she ever dared imagine.